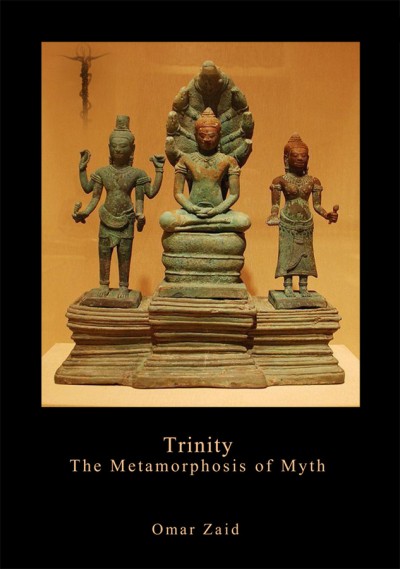 
Trinity : The Metamorphosis of Myth

Beginning with the Dravidian Culture (8,000 BC) through to the present evangelical processions, Trinity explains the historical development, progression, and the several metaphysical constructs related to the Trinitarian Doctrine’s origin and practice of human sacrifice. Essays trimmed with satire illustrate correlating tenets of the great religions. A defense of pure Monotheism (Islam) is also presented that demonstrates misconceptions drawn on misunderstood or purposely mistranslated passages of both Old and New Testaments. A sobering critique and admonition is offered to Muslims worldwide. In addition, scriptural and geo-political expositions are given with a view to describe the occult aspects of the Trinitarian doctrine’s influence: especially with regard to the present worldview vis-à-vis Zionist sentiments; international Judeo-Christian occult alliances; the global illicit drugs trade; and secret societies immersed in the doctrine’s black arts (Satanism). By comparison, the many books on ‘Conspiracy Theories’ are myopic ventures as none present a synthesis of the geo-political cum religious mindset with a pan-historic view. It is this perspective that sets the book in a singular category. 1. Tsunamic in scope and effect. This book is priceless. Prof. Dato Dr.. Arrifin Suhaimi, Kuala Lumpur, Malaysia 2. Compelling! I couldn’t put it down. Do you have a copy of the Koran I could borrow?” Retired British Electrical Engineer, Kuching, E. Malaysia (Anglican) 3. I now understand why for thirty years my best ideas and efforts have been blocked by my superiors. It is time to retire. Haji Taufek Sahran, deceased, Kuching, Sarawak, E. Malaysia. 8 This book must be published. It is a thorough critique of all strands of thought of all ages which in the author's view have helped in one way or another to corrupt the tenets of pure monotheism. Emeritus Prof. Dr. Osman Bakar 9 Trinity is a fierce denunciation of the myths that surround many religions. At the same time, it explains why the One God is such a compelling belief in a simple, down-to-earth manner. This is what makes this unique book so attractive.  Prof. Dr. Chandra Muzaffar, 10 After reading trinity I couldn’t sleep until I became a Muslim. Francis Imam Yeoh (now deceased) , KL, Malaysia 2008         Book Review; London Literary Guide for Publishers (2006) - Title: Trinity, Author: Omar Zaid “Trinity is an ambitious and provocative critique – a ‘small plate of meaty polemic with a hot relish of reason’, as the author asserts – that focuses on the so-called facts, theories and philosophical ideals behind various religious faiths, with a particular spotlight on Islam, which Zaid, as a staunch Muslim, defends with conviction – though not uncritically. Zaid is an erudite writer who explores his subject with a verve and infectious curiosity born of interest, sincerity and certainty. Some readers might find his single-minded commitment somewhat hard to swallow, but he is at least open-minded enough to both examine other faiths, and also to criticize certain practices of his own where he feels this is required. The book is frequently well written in a manner that is suitably scholarly (figures and footnotes reinforce its air of authority), yet it is also accessible and eminently readable for lay people. There are numerous instances of richly poetic language that makes this seem as much a labor of love as a learned and there are moments of real wit too (eg ‘The Pharisees had two sets of books like all good tax evaders’). Overall this is an intelligent, rigorously researched work that is extremely topical in today’s religious and political climate. Its readership could well be broad, as the themes it broaches are far-reaching and relevant.” _____ To say the book is both topical and controversial as it relates to the present global initiatives and polemics is an understatement. Moreover, its most potent effect is to inform the reader in such a manner that he or she may comprehend historical conundrums driven by the absurdities governing the hearts and minds of many sectarian adherents and leaders. It is copiously documented and presents a critically-woven, candid tapestry with a panoramic synthesis wherein one may comprehensively view mankind’s position. Its non-fictional content attempts something worthy of many cited writers, representing numerous years of research and contemplation.